Welcome to my author blogspot. My main website is over on http://bhbranham.wordpress.com but I'm going to experiment with both sites - hopefully even integrate them to reduce management. So many social media channels these days ...

I am currently writing a fiction series about a group of musical misfits who form a rock band. Sounds straightforward but the story is part comedy, adventure, drama, romance, and daily life so it can be hard to explain in a short snippet. Here goes:

Rocker-in-self-exile Blar Umlaut spots an enchanting goth princess in a snowstorm. The chain of events that follow lead to a revival of his career, a new band, romance, adventure, and dark hilarity with the trio of women he befriends.He isn’t certain whether he is helping because he’s smitten or because it would be a crime to let their talent go unnoticed. It’s a lot of both. It Really IS Rocket Science.

Join Blar and the Lost Girls, Tsika, Kpau, and Glycerin as they join forces to form “It Really IS Rocket Science” and try to take their band to the top while keeping each other afloat. 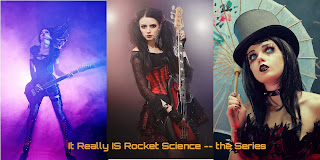 I have five novels roughed out with plans for seven. The first volume is on the shelves now with the second volume due out in the January/February 2014 time frame. The third volume should be released in March/April 2014.

Reviews for my first volume may be read at Amazon: Follow the silly link!

My books are available in almost any electronic format and in paperback (Amazon, Nook (B&N), Kobo, etc). If you want a signed paperback, visit my store here.
Posted by Unknown at 12:33 PM No comments: