2016 Event season is beginning. This year will see the 4th book of the series.

After summer of 2016, there will be four books in the original American English series.

There will also be a Polish language edition series beginning this year. Polish, eh? The model Mamiko is Polish. While working on projects together and interacting with her fans - it became clear I had a huge potential audience in Poland. They are avid readers as a nation and their language often gets left out when the world's books are translated. I have a raw translation team and Mamiko is signed on as the Polish Editor for the series.

The biggest problem we have encountered is that Poland has only a few dialects and they are difficult even for Poles to tell apart. This makes creating Polish language styles for British, Russian, Texan, and other accents/dialects a little challenging. I'm still perplexed about how to handle Sashiko's aberrant version of English with her Scottish background.

In other news, the Polish edition will be formatted to split the contents of Surfing with the Alien into two books. Weighing in at nearly 600 pages, alarms go off every time I shows the books to publishers and when readers complain of arm aches holding the paperbacks. It really is two books with a clean split dead center. But at the time I was unsure if I would go farther than Go Go Godzilla in the series and thought a trilogy was the best idea. So. The Polish edition will be my test case before re-issuing the series with the new story format.  I will call it the Remastered Edition and both editions will line up with Roll With The Changes. So no one has to buy replacement books unless they're just collecting. Book 2.1 would retain the original cover. Book 2.2 would use my Kpau cover. 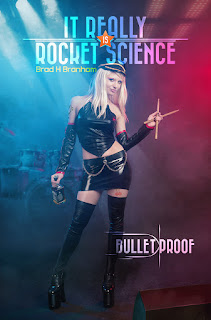 Speaking of collections, I am seriously considering an Art Book of The Women Of Rocket Science. A nice glossy coffee table book of Glycerin, Tsika, Kpau, and the rest for those who appreciate the hard work of Elisanth, Mamiko, Khimera and the other models.

I am still looking for a Sashiko I guess. I've given up on Blar. I'd almost be better off using my older son with stage makeup and wig. He's almost the right age for Blar now.

Okay, I need to trim up and upload the short stories again. They seen some substantial revision.