From left to right, the image shows Glycerin as she starts out in a sort of sad clown neo-mod scheme, grows into a dark brutal look, then reboots in bright retro themes. I sometimes say the series is actually about Tsika and Glycerin with the others (including Blar) as catalysts. If I picked a single protagonist, it might be Glycerin and her labyrinth journey between light and darkness. The six foot tall lanky creature that Kpau calls "her favorite space alien" is complicated in ways even her closest friend Tsika does not realize as the series begins.
Pick up the series in paperback via any book retailer (they may have to order it), or in Kindle format at Amazon. Working on getting the Nook readers updated with the latest versions. You can catch on daily babblings by me (story excerpts, print and poster works, etc) on Facebook. 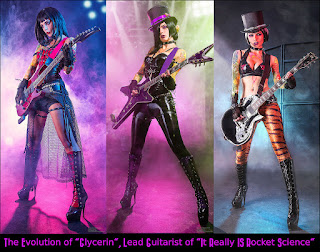 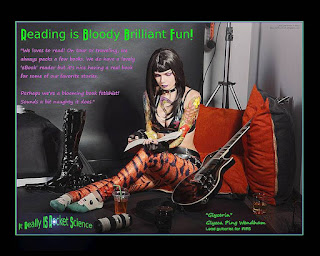 I'm in the middle of Volume 4 writing, slashing, deleting, revising, expanding ... meanwhile also finishing up on two photo shoot projects. One is done. Late career Glycerin. I particularly like this one of her reading quietly between takes on a photo shoot for an album cover.

WE HAVE KPAU! ATTENTION!
The shoot for Kpau is in post-proc but I put together a couple of teaser images. Here's one.

My model for Tsika and I are trying to work out a schedule for the next shoot where we will get to see "brutal metal Tsika" rather like the metal Glycerin on the cover of Go Go Godzilla of the Rocket Science series.

Snippet from volume 4. It's easier to spoil the comedy moments without screwing up the storyline.

Just as Blar began to think it was time to un-equip his sunglasses, Kpau's phone began buzzing the theme to an old television series called "Rawhide". She stirred, punched it off and sat up to peer around.

Grinning idiotically, she put her sunglasses on then assumed a serious deadpan face.

"It's one hundred and six miles to Chicago, we got a full tank of gas, half a pack of weed, it's dark... and we're wearing sunglasses."

Blar glanced at the odometer, then made a face. "You spent days figuring that out and messed with our schedule just enough to make that happen, didn't you?"

"You could be rich with the kinds of skills you keep bubbling up at me, but--"

Posted by Unknown at 6:58 PM No comments: